The Karpman drama triangle was developed by psychiatrist and Transactional Analysis teacher Dr. Stephen B. Karpma. He was a student of Canadian-born psychiatrist  Eric Berne, M.D., the creator of transactional analysis psychology and author of Games People Play. The Drama Triangle is a model of human interaction that maps a type of destructive interaction that can occur among people in conflict.

The triangle of actors in the drama are persecutors, victims, and rescuers.

Transactional analysis is based on the idea that one’s behavior and social relationships reflect an interchange between parental (critical and nurturing), adult (rational), and childlike (intuitive and dependent) aspects of personality established early in life.

Karpman placed these three roles on an inverted triangle and described them as being the three aspects, or faces of victim

The Victim: The Victim in this model is not intended to represent an actual victim, but rather someone feeling or acting like one. The Victim’s stance is “Poor me!” The Victim feels victimized, oppressed, helpless, hopeless, powerless, ashamed, and seems unable to make decisions, solve problems, take pleasure in life, or achieve insight.

The Rescuer: The rescuer’s line is “Let me help you.” A classic enabler, the Rescuer feels guilty if they don’t go to the rescue. Yet their rescuing has negative effects: It keeps the Victim dependent and doesn’t allow the Victim permission to fail and experience the consequences of their choices.

The Persecutor: The rescuer’s line is “It’s all your fault.” The Persecutor is controlling, blaming, critical, oppressive, angry, authoritarian, rigid, and superior.

These roles keep getting played out over and over. However, the problem with this Drama Triangle is that whenever anyone gets uncomfortable in their role, they only have either of the other two roles to choose from.

Stephen Karpman designed the Drama Triangle to outline the way these dysfunctional relationship patterns fit into actual roles.  The roles of persecutor, rescuer, and victim appear consistently in drama-dominated, unequal relationships and keep those relationships from maturing and functioning in a healthy, happy, relaxed way. The borderline, narcissist, and Caretaker typically get locked into these three rigid and self-rewarding/self-punishing roles as their only choices.

In a family, there may actually be three people playing the roles, such as father, mother, and child. But often only two people play the roles by switching back and forth. The Caretaker, borderline, and narcissist have their preferred roles as noted above, and they play out implicit, covert agreements to stay in these roles:

By understanding this triangle of roles and the secret agreements being acted out, it is easier to see why the borderline, narcissist, and Caretaker find one another compatible and how they keep the others in their assigned roles. These roles keep getting played out over and over. However, the problem with this Drama Triangle is that whenever anyone gets uncomfortable in their role, they only have either of the other two roles to choose from. The rules in the BP/NP-dominated family are very strict and very rigid, and the Caretaker buys into this dynamic when stepping into being the Caretaker.

A large part of what creates the drama is when the borderline, narcissist, or Caretaker gets fed up with his or her role. Obviously, these roles can become quite tedious and frustrating over time. But with only two other roles to choose from, the results are completely predictable, which is very important to those playing this drama game.

According to Reality Guide & Personal Growth Mentor, Lynne Forest who has taught the Drama Triangle for 30+ years. She prefers to call it the Victim Triangle or “Shame Generator”.

Lynne writes about starting gate position(s) in the Drama Triangle:

Each person has a primary or most familiar role – what I call their “starting gate” position. This is the place from which we generally enter, or “get hooked” onto, the triangle. We first learn our starting gate position in our family of origin. Although we each have a role with which we most identify, once we’re on the triangle, we automatically rotate through all the positions, going completely around the triangle, sometimes in a matter of minutes, or even seconds, many times every day.

Starting gate Rescuers (SGR) see themselves as “helpers” and “caretakers.” They need someone to rescue (victim) in order to feel vital and important. It’s difficult for SGR’s to recognize themselves as ever being in a victim position – they’re the ones with the answers after all.

Starting Gate Persecutors (SGP), on the other hand, identify themselves primarily as victims. They are usually in complete denial about their blaming tactics. When it is pointed out to them, they argue that attack is warranted and necessary for self protection. These two – the Rescuer and the Persecutor – are the two opposite extremes of Victim. But again, regardless of where we start out on the triangle, all roles eventually end up in victim. It’s inevitable.

Starting Gate Victim’s (SGV’s) believe they cannot take care of themselves. They see themselves as consistently unable to handle life. They even rescue from a one-down position, saying things to their potential rescuer like “You’re the only one who can help me.” These are words that any SGR longs to hear!

Starting gate positions are generally set-up in childhood. For instance, if a parent does not ask their children to take age-appropriate responsibility for themselves, they may grow up either to become adults who feel inadequate at taking care of themselves (starting gate victim) or become resentful adults who blame others when they don’t get taken care of in the way they think they should be. (a persecutor role). Either way, they are set up for a lifetime on the victim triangle.

In her book, “Stop Caretaking the Borderline or Narcissist.” Marriage and Family Therapist Margalis Fjelstad profer some ways of breaking out of the Drama Triangles:

The most important action that you need to take to quit caretaking is to break out of the Drama Triangle. This means that you are going to quit taking on the roles of victim, persecutor, and rescuer. All of these roles require one person to be superior, right, good, and better than the other person, while the other person has to be inferior, wrong, bad, and worse. This one-up/one-down game has to be stopped in order for you to stop caretaking.

Stop the “Poor Me” Game: Stop Being a Victim

When you begin to refuse being the inferior, the victim, you begin the journey to breaking the Drama Triangle. There are many more possible roles and behaviors to take than the three that have been allowed up to now in your relationship. You have the capacity to step back and think of what you really feel, what you really want, and what actions could get you going in a new direction. The BP/NP can’t or won’t step out of these designated roles, but you could choose to do so and change the game entirely.

Breaking the rule of blaming others can be challenging because you may not really know how to ask someone to do something different. If you look back at the communication model, you will see the way to make this change. Instead of telling the person, “You didn’t wash your hands” or “You gave me the wrong papers,” change the focus from what didn’t happen to what you want. Even just using the “I want . . .” statement from the model is often enough, for example, “I’d like you to wash your hands before dinner” or “I’d appreciate it if you could find page 8 for me.

Giving directions and telling others what you want rather than blaming them for doing things wrong shows them how to be successful and feels a lot better, too. You are also more likely to get more cooperation from others.

You have been the Caretaker as a way to keep the peace, keep the delusion, keep your fantasy, keep the family together, keep the BP/NP calm, and so on. But face it: none of your caretaking methods have worked for more than a few minutes or a few days anyway.

Giving up rescuing the BP/NP is an action, not a discussion. It isn’t something to announce to the BP/NP.

Instead of being the rescuer, you give the BP/NP the respect of letting him or her take care of solving his or her own problems, dealing with his or her feelings, and choosing his or her own solutions. You can refuse to take what the BP/NP says and does as meaning anything about who you are. You can quit letting fear, obligation, and guilt control and manipulate you into taking care of the BP/NP when you really don’t want to. Your attitude makes a huge difference in getting out of the Drama Triangle. 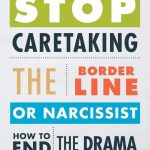 Theodore Roosevelt’s Man in the Arena.