Book Summary – Made In America by Sam Walton.

“With the possible exception of Henry Ford, Sam Walton is the entrepreneur of the century.”- TOM PETERS, co-author of In Search of Excellence

Made In America is the story of how Sam Walton built a retailing empire, “Walmart” from a humble upbringing. He started it from a single dime store in a hardscrabble cotton town (Arkansas) into the largest retailer in the world. In a story rich with anecdotes and the “rules of the road” of both Main Street and Wall Street, Sam Walton chronicles the inspiration, heart, and optimism that propelled him to lasso the American Dream.

Wal-Mart Stores Inc. grew to be the world’s largest corporation by revenue and the biggest private employer in the world. For a while, Walton was the richest man in America. As of July 31, 2020, Walmart has 11,496 stores and clubs in 27 countries, operating under 56 different names.

I think it must be human nature that when somebody homegrown gets on to something, the folks around them sometimes are the last to recognize it.

The company which Sam built Walmart is the world’s largest company by revenue, with US$514.405 billion, according to the Fortune Global 500 list in 2019. It is also the largest private employer in the world, with 2.2 million employees. It is a publicly-traded family-owned business, as the Walton family controls the company. Sam Walton’s heirs own over 50 percent of Walmart by holding company Walton Enterprises and their holdings.

Sam Walton was a relentless, hands on entrepreneur who led by example. In his own words:

I don’t know that anybody else has ever done it quite like me: started out as a pure neophyte, learned his trade, swept the floor, kept the books, trimmed the windows, weighed the candy, rung the cash register, installed the fixtures, remodeled the stores, built an organization of this size and quality, and kept on doing it right up to the end because they enjoyed it so much. No one that I know of has done it that way.

Here are my favourite take aways from reading,Made In America by Sam Walton:

In 1945, after leaving the military, Walton took over the management of his first variety store at the age of 26. With the help of a $20,000 loan from his father-in-law, plus $5,000 he had saved from his time in the Army, Walton purchased a Ben Franklin variety store in Newport, Arkansas. The store was a franchise of the Butler Brothers chain.

There’s always a challenger coming along. There may be one on the street right now formulating a plan to get to the top. To stay ahead of those challengers, we have to keep changing and looking back over our shoulders and planning ahead.

There’s nothing at all profound about any of our principles. In fact, they’re all common sense, and most of them can be found in any number of books or articles on management theory—many of which I’ve read and studied over the years. But I think the way we’ve applied them at Wal-Mart has been just a little different.

RULE 1: COMMIT to your business.

Believe in it more than anybody else. I think I overcame every single one of my personal shortcomings by the sheer passion I brought to my work. I don’t know if you’re born with this kind of passion, or if you can learn it. But I do know you need it. If you love your work, you’ll be out there every day trying to do it the best you possibly can, and pretty soon everybody around will catch the passion from you —like a fever.

RULE 2: SHARE your profits with all your associates, and treat them as partners.

In turn, they will treat you as a partner, and together you will all perform beyond your wildest expectations. Remain a corporation and retain control if you like, but behave as a servant leader in a partnership. Encourage your associates to hold a stake in the company. Offer discounted stock, and grant them stock for their retirement. It’s the single best thing we ever did.”

Money and ownership alone aren’t enough. Constantly, day by day, think of new and more interesting ways to motivate and challenge your partners. Set high goals, encourage competition, and then keep score. Make bets with outrageous payoffs. If things get stale, cross-pollinate; have managers switch jobs with one another to stay challenged. Keep everybody guessing as to what your next trick is going to be. Don’t become too predictable.

RULE 4: COMMUNICATE everything you possibly can to your partners.

“RULE 5: APPRECIATE everything your associates do for the business.

A paycheck and a stock option will buy one kind of loyalty. But all of us like to be told how much somebody appreciates what we do for them. We like to hear it often, and especially when we have done something we’re really proud of. Nothing else can quite substitute for a few well-chosen, well-timed, sincere words of praise. They’re absolutely free—and worth a fortune.”

Find some humor in your failures. Don’t take yourself so seriously. Loosen up, and everybody around you will loosen up. Have fun. Show enthusiasm—always. When all else fails, put on a costume and sing a silly song. Then make everybody else sing with you. Don’t do a hula on Wall Street. It’s been done. Think up your own stunt. All of this is more important, and more fun, than you think, and it really fools the competition. “Why should we take those cornballs at Wal-Mart seriously?”

RULE 7: LISTEN to everyone in your company.

And figure out ways to get them talking. The folks on the front lines—the ones who actually talk to the customer—are the only ones who really know what’s going on out there. You’d better find out what they know. This really is what total quality is all about. To push responsibility down in your organization, and to force good ideas to bubble up within it, you must listen to what your associates are trying to tell you.

If you do, they’ll come back over and over. Give them what they want—and a little more. Let them know you appreciate them. Make good on all your mistakes, and don’t make excuses—apologize. Stand behind everything you do. The two most important words I ever wrote were on that first Wal-Mart sign: “Satisfaction Guaranteed.” They’re still up there, and they have made all the difference.

RULE 9: CONTROL your expenses better than your competition. This is where you can always find the competitive advantage. For twenty-five years running—long before Wal-Mart was known as the nation’s largest retailer—we ranked number one in our industry for the lowest ratio of expenses to sales. You can make a lot of different mistakes and still recover if you run an efficient operation. Or you can be brilliant and still go out of business if you’re too inefficient.”

Go the other way. Ignore the conventional wisdom. If everybody else is doing it one way, there’s a good chance you can find your niche by going in exactly the opposite direction. But be prepared for a lot of folks to wave you down and tell you you’re headed the wrong way. I guess in all my years, what I heard more often than anything was: a town of less than 50,000 population cannot support a discount store for very long.”

“I believe that every right implies a responsibility; every opportunity an obligation; every possession a duty.”—JOHN D. ROCKEFELLER, JR.”

Think One Store at a Time – Sam Walton :

All the best in your quest to get better. Don’t Settle: Liver with Passion. 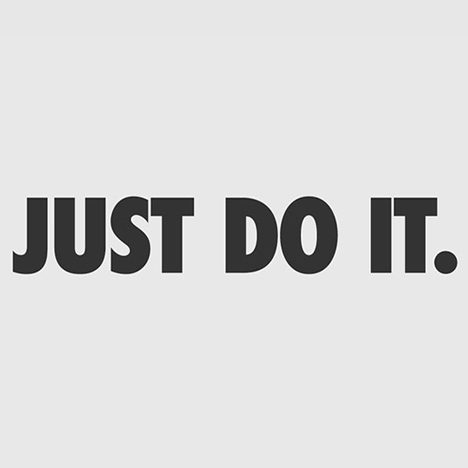 Just Do It Speech by Art Williams