Dealing with the Fear of Missing Out (FOMO).

Fear Of Missing Out (FOMO) is the uneasy and sometimes all-consuming feeling that you’re missing out—that your peers are doing, in the know about, or in possession of more or something better than you. FOMO may be social angst that’s always existed, but it’s going into overdrive thanks to real-time digital updates and to our constant companion, the smartphone. 1

With over 2.5 billion active monthly Facebook users, 1.1 billion on Instagram, 353 million on Twitter, 756 million users on Linkedin, users of these social media platforms have an unprecedented array of tools at their disposal to view how others are living their lives, and it is leading more people to have a fear of missing out.

In February 2018, I decided to delete Twitter, Deactivate Facebook and Instagram. Three years later, I really do not miss much, but I have a renewed sense of peace and equanimity. It is tough not knowing what is happening to some dear friends, but I have since realized that I take a break from it if it is not taking me to the next level. Social Media is one of the greatest tools on the internet, but too much exposure can harm your health and well-being like every other tool. I still use business social media accounts to access funny Nigerian comedy on Instagram, research content, and listen on Twitter, but I don’t use my personal accounts anymore.

I have not been able to get rid of my fear of missing out totally, but I have set boundaries to navigate the social media roller coaster. For instance, instead of watching 90 minutes of Manchester United games, I watch highlights; instead of getting stuck on the Twitter trend of the day, I switched the language of the Twitter business account I use to South Korean. I don’t understand the language; hence I am not focused on the trend. I hardly listen to the news because I believe it usually contains lots of propaganda, distorted views of other people, and negative vibes.

The key to dealing with FOMO I suppose is to stick with the basics, surround yourself with positive people, inspiring content and constantly strive to re-invent yourself. Self-Awareness is key as If you understand who you are, the constant comparisons encouraged on social media would not be appealing to you. When you know why you are here, you would have your priorities re-ordered, and making everything count would be a daily goal.

Social Media platforms are designed and constantly been tweaked to make the apps, reward mechanism, and cues to be irresistible. Our self-discipline is not enough to fight the irresistible design hence we get nomophobic (anxiety or fear caused by not having our phone). According to  Adam Alter, a professor of psychology and marketing at NYU and author of Irresistible: The Rise of Addictive Technology and the Business of Keeping Us Hooked:

Tech isn’t morally good or bad until it’s wielded by the corporations that fashion it for mass consumption. Apps and platforms can be designed to promote rich social connections; or, like cigarettes, they can be designed to addict. Today, unfortunately, many tech developments do promote addiction.

Instagram, like so many other social media platforms, is bottomless. Facebook has an endless feed; Netflix automatically moves on to the next episode in a series; Tinder encourages users to keep swiping in search of a better option. Users benefit from these apps and websites, but also struggle to use them in moderation.

A like on Facebook and Instagram strikes one of those notes, as does the reward of completing a World of Warcraft mission, or seeing one of your tweets shared by hundreds of Twitter users. The people who create and refine tech, games, and interactive experiences are very good at what they do. They run thousands of tests with millions of users to learn which tweaks work and which ones don’t—which background colors, fonts, and audio tones maximize engagement and minimize frustration.

As an experience evolves, it becomes an irresistible, weaponized version of the experience it once was. In 2004, Facebook was fun; in 2016, it’s addictive.

According to Tristan Harris of the Center for Humane Technology; the co-inventor of the Facebook “Like” button, The Social Media platform have three essential goals

1. Engagement Goal: Keep you mindlessly scrolling your feed/timeline.
2. Growth Goal: Keep you coming backing and inviting as many friends and getting them to invite more friends
3. Advertising Goal: To make sure that with all the activities they are making more money from advertisers

These goals are powered by algorithms whose job is to figure out what to show you to keep these numbers going up.

In her book, The Big Nine: How the Tech Titans and Their Thinking Machines Could Warp Humanity, American Futurist and Author Amy Webb writes about the constant nudging strategies used by the social media platforms to increase our engagement and optimize their revenue. She writes:

In behavioral science and game theory, a concept known as “nudging” provides a way to indirectly achieve a certain desired behavior and decision, such as getting people to save for retirement in their 401k plan. Nudging is widely used throughout all of our digital experiences, from autofill in search to the limited menu screens when you look up local restaurants on Yelp.

The goal is to help users feel like they’ve made the right choice, regardless of what thing they choose, but the consequence is that everyday people are learning to live with far less choice than actually exists in the real world.

“We’re also being nudged to binge watch hours of video at a time, to play extra rounds of video games, and to check our social media accounts. Optimizing AI means nudging humans.”

The Negative Loop of Social Media

According to a study conducted by University of Michigan Psychologists, they examined how ‘Facebook Use Predicts Declines in Subjective Well-Being in Young Adults. Their result indicates that Facebook use predicts negative shifts in how people feel moment-to-moment and how satisfied they are with their lives.

A 2018 study found in the Psychiatry Research Journal demonstrated that FoMO was most strongly related to both problematic smartphone use and social smartphone use relative to negative affect and fears of negative and positive evaluation, and these relations held when controlling for age and gender.

In 2015, Microsoft Canada reported that the average human had an attention span of twelve seconds; by 2013 that number had fallen to eight seconds. (According to Microsoft, a goldfish, by comparison, has an average attention span of nine seconds.)

Ninety-five percent of adults use an electronic device that emits light in the hour before bed, and more than half check their emails overnight. Sixty percent of adults aged between eighteen and sixty-four keep their phones next to them when they sleep, which might explain why 50 percent of adults claim they don’t sleep.

“[What information consumes is] the attention of its recipients. Hence a wealth of information creates a poverty of attention.” – Herbert Simon

How to Deal with FOMO

One of the major ways of dealing with the fear of missing out (FOMO) is to become more self-aware of yourself and your environment. Many of us have an external locus of control; hence we need the validation of our peers, social media algorithm, and the outside world to feel whole. By working on yourself and discovering your purpose, you would strengthen your internal locus of control. With more self awareness comes the ability to be self-reflect and listen to yourself more instead of looking out to the world for validation.

Our perception of people reality is usually faulty especially on social media. It is always greener at the other side, people would present you well curated images and highlight reels of their lives but most of us don’t realize that they are also dealing with something we know nothing about.

One way to deal with the Fear of Missing Out (FOMO) is always to be grateful for what you presently have. Many of our FOMO-induced activities are based on our aspiration for what we do not have but forgetting to give gratitude for what we do have. We take our health for granted until we lose it, we aspire for more material things, and social media encourages/amplifies the constant desire for more.

To help with giving gratitude daily, I use the five minutes gratitude journal. It allows you to meditate on the things you are grateful for, the things you want to achieve today, daily afrirmations and things you can improve on. The Journal as been transformative for me and I highly recommend it.

One of the strategies that could help you deal with FOMO is to batch your activities into time blocks. I personally watch funny Nigerian Instagram skits in evenings to lighten up, read magazines in the weekend, watch youtube documentaries in the evening and work in the morning. You would use apps as Freedom, Rescue Time to set strict time blocks for these activities.

Setting boundaries on how we use social media and the internet is very important in dealing with FOMO. Set times for disconnect your wi-fi, having face to face meeting with family and friends.

One of the best ways to reduce your constant picking up of your phone is to delete the apps from you mobile phone. With the apps deleted, you would not be tempted to pickup your phone constantly to read the notifications.

Dealing with FOMO is hard as the social media platforms have the best scientists, developers, and product designers working in overdrive to increase our engagement on their apps. They are designing Irresistible applications that exploit our basic human inclination to connect with others. We are constantly nudged, and our attention is traded to the highest bidding advertisers for revenue optimization. Self-discipline and willpower are not enough to tackle this challenge; hence you need tools like accountability partners, social pressure, and self-awareness to beat the algorithms.

It is can be extremely to not check your phone or feel you are missing out of what is happening in the world. What have found out in my journey of not using my personal social media accounts for the past 3 years is that, you would be fine. Continue to work on yourself and your tribe would eventually come around. 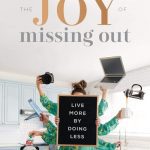 Book Summary -The Joy of Missing Out by Tanya Dalton. 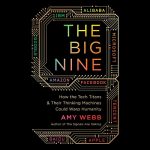 Book Summary – The Big Nine: How the Tech Titans and Their Thinking Machines Could Warp Humanity by Amy Webb.