Jeffrey Preston Bezos is an American Internet Entrepreneur, Media Proprietor, and Investor. He is the founder and CEO of multi-national technology company Amazon. According to the Forbes wealth index, Jeff Bezos is the first centi-billionaire and he has been the world’s richest person since 2017 and was named the “richest man in modern history” after his net worth increased to $150 billion in July 2018.

According to Forbes, Bezos is the first person in history to have a net worth exceeding $200 billion. Jeff Bezos is one of my favorite people worldwide for his relentlessness, curiosity, initiative, and sense of adventure. Jeff has a continuous improvement orientation and often finishes his letter to shareholders with “It is always Day One.”

In his recently released book, Invent and Wander: The Collected Writings of Jeff Bezos, Jeff shares in his own words, the core principles and philosophy that have guided him in creating, building, and leading Amazon and Blue Origin.

Amazon, the world’s largest online retailer, has changed how we shop and what we expect of shipping and deliveries. More than half of US households are members of Amazon Prime, and Amazon delivered ten billion packages in 2018, which is two billion more than the number of people on this planet. Amazon Web Services (AWS) provides cloud computing services and applications that enable start-ups and established companies to easily create new products and services, just as the iPhone App Store opened whole new pathways for business. Amazon’s Echo has created a new market for smart home speakers, and Amazon Studios is making hit TV shows and movies.

Amazon is also poised to disrupt the health and pharmacy industries. At first, its purchase of the Whole Foods Market chain was confounding until it became apparent that the move could be a brilliant way to tie together the strands of a new Bezos business model, which involves retailing, online ordering, and superfast delivery, combined with physical outposts. Bezos is also building a private space company with the long-term goal of moving heavy industry to space, and he has become the owner of the Washington Post.

“Jeff Bezos has never outgrown his wonder years. He retains an insatiable, childlike, and joyful curiosity about almost everything. His interest in narrative and storytelling not only comes from Amazon’s roots in the bookselling business; it is also a personal passion.”

“As a kid, Bezos read dozens of science fiction novels each summer at a local library, and he now hosts an annual retreat for writers and moviemakers. Likewise, although his interest in robotics and artificial intelligence was sparked because of Amazon, these fields have grown to become intellectual passions, and he now hosts another gathering each year that brings together experts interested in machine learning, automation, robotics, and space. He collects historical artifacts from great moments in science, exploration, and discovery. And he connects this love of the humanities and his passion for technology to his instinct for business.”

“When Jeff Bezos was a young kid—big-eared, with a booming laugh and insatiable curiosity—he spent his summers on the sprawling South Texas ranch of his maternal grandfather, Lawrence Gise, an upright but loving naval commander who had helped develop the hydrogen bomb as an assistant director of the Atomic Energy Commission.

There Jeff learned self-reliance. When a bulldozer broke, he and his grandfather built a crane to lift out the gears and fix them. Together they castrated the cattle, built windmills, laid pipe, and had long conversations about the frontiers of science, technology, and space travel. “He did all his own veterinary work,” Bezos recalls. “He would make his own needles to suture up the cattle with. He would take a piece of wire, use a blowtorch to heat it up, pound it flat, sharpen it, drill a hole through it—make a needle. Some of the cattle even survived.”

In his “We Are What We Choose” 2010 Princeton University Commencement Speech, Jeff shares an encounter with his grandparents, the need to be kind, and the power of choice:

Jeff was a voracious reader with an adventurous mind. His grandfather would take him to the library, which had a huge collection of science fiction books. Over the summers Jeff worked his way through the shelves, reading hundreds of them. Isaac Asimov and Robert Heinlein became his favorites, and later in life he would not only quote them but also occasionally invoke their rules, lessons, and lingo.

YOU GET DIFFERENT gifts in life, and one of my great gifts is my mom and dad.

His self-reliance and adventurous spirit were also instilled by Jeff’s mother, Jackie, who was just as tenacious and sharp as her father and son. She became pregnant with Jeff when she was only seventeen. “She was a high school student,” Jeff explains. “You’re probably thinking, ‘Wow in 1964 in Albuquerque, it was probably really cool to be a pregnant girl.’ No, it wasn’t. It took a lot of grit. And a lot of help from her parents. The high school actually even tried to kick her out of school. I guess they thought pregnancy might be contagious. And my grandfather being a cool and wise guy negotiated a deal with the principal that allowed her to stay and finish high school.” What was the main lesson Jeff learned from her? “You grow up with a mother like that and you have unbelievable grit,” he says.”

“His mother encouraged his love of electronics and mechanics by shuttling him to and from RadioShack and letting him turn the family garage into a science project lab. She even indulged his penchant for creating ingenious booby traps to frighten his younger brother and sister. “I was constantly booby-trapping the house with various kinds of alarms and some of them were not just audible sounds, but actually like physical booby traps,” he says. “My mom is a saint because she would drive me to RadioShack multiple times a day.

Jeff’s biological father ran a bicycle store and performed in a circus unicycle troupe. He and Jackie were married only briefly. When Jeff was four, his mother remarried. Her second husband was a better match, a person who also taught Jeff the value of grit and determination: Miguel Bezos, known as Mike. He, too, was self-reliant and adventurous.

He had come to the United States at age sixteen as a refugee from Fidel Castro’s Cuba, traveling on his own and wearing a jacket his mother had sewed for him out of household rags. After he married Jackie, he adopted her lively son, who took his last name and forever after considered him his real father.

“At his Montessori preschool, Bezos was already fanatically focused. “The teacher complained to my mother that I was too task-focused and that she couldn’t get me to switch tasks, so she would have to just pick up my chair and move me,” he recalls. “And by the way, if you ask the people who work with me, that’s still probably true today.”

“His childhood business heroes were Thomas Edison and Walt Disney. “I’ve always been interested in inventors and invention,” he says. Even though Edison was the more prolific inventor, Bezos came to admire Disney more because of the audacity of his vision. “It seemed to me that he had this incredible capability to create a vision that he could get a large number of people to share,” he says. “Things that Disney invented, like Disneyland, the theme parks, they were such big visions that no single individual could ever pull them off, unlike a lot of the things that Edison worked on. Walt Disney really was able to get a big team of people working in a concerted direction.”

After graduation Bezos went to New York to apply his computer skills to the financial industry. He ended up at a hedge fund run by David E. Shaw, which used computer algorithms to discover pricing disparities in the financial markets. Bezos took to the work with a disciplined zeal. Foreshadowing the workplace fanaticism he would later try to instill at Amazon, he kept a sleeping bag in his office in case he wanted to sleep there after a late night of work.

Realizing that it was prudent to start with one product, he chose books—partly because he liked them and also because they were not perishable, were a commodity, and could be bought from two big wholesale distributors. And there were more than three million titles in print—for more than a brick-and-mortar store could possibly keep on display.

When he told David Shaw that he wanted to leave the hedge fund to pursue this idea, Shaw took him on a two-hour walk through Central Park. “You know what, Jeff, this is a really good idea. I think you’re onto a good idea here but this would be a better idea for somebody who didn’t already have a good job.” He convinced Bezos to think about it for a couple of days before making a decision. Bezos then consulted his wife, MacKenzie, whom he had met at the hedge fund and married the year before. “You know you can count me in 100 percent, whatever you want to do,” she said.”

To make the decision, Bezos used a mental exercise that would become a famous part of his risk-calculation process. He called it a “regret minimization framework.” He would imagine what he would feel when he turned eighty and thought back to the decision. “I want to have minimized the number of regrets I have,” he explains. “I knew that when I was eighty, I was not going to regret having tried this. I was not going to regret trying to participate in this thing called the internet that I thought was going to be a really big deal. I knew that if I failed, I wouldn’t regret that, but I knew the one thing I might regret is not ever having tried. I knew that that would haunt me every day.

“We didn’t invest in Amazon, we invested in Jeff.” They eventually put in more money, ended up owning 6 percent of the company, and used their wealth to become very active and creative philanthropists focused on providing early-childhood learning opportunities for all children.”

The earth is finite, and if the world economy and population is to keep expanding, space is the only way to go. 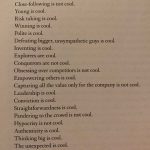 See It Through by Edgar Albert Guest.